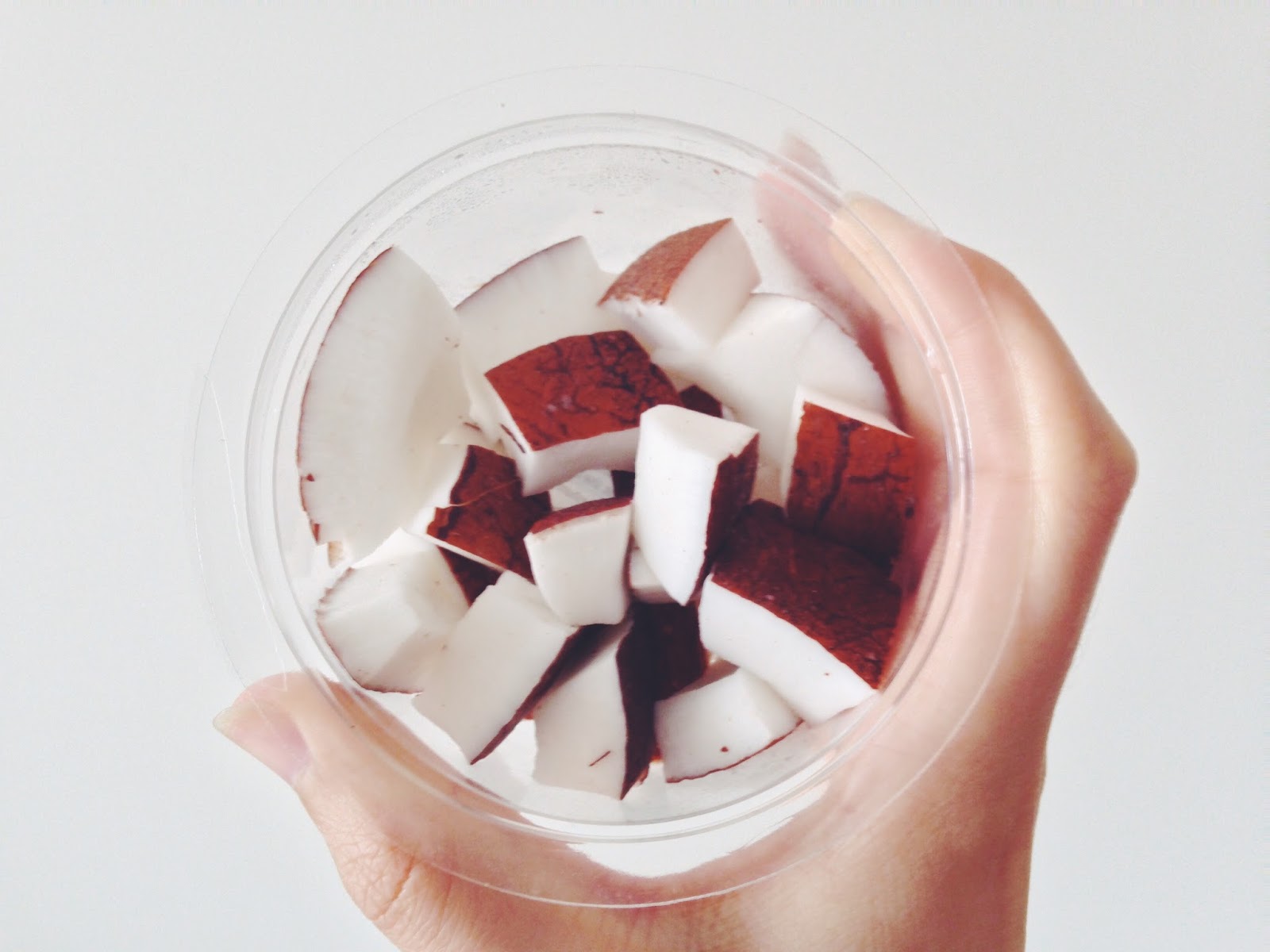 I’ve become something of a “coconutter” – these three snaps of chopped coconut, coconut oil and coconut water are only a few of the coconut-based products I have lying around my flat at the moment, and I’m always being enticed by anything that mentions the delectable fruit. Well, that’s where my first inquisitive thought came from in fact – is coconut a fruit? Is it a seed? What on earth is it?

It turns out, coconut is both a fruit, a seed, and a drupe, a fleshy fruit defined by its stone. So where is the stone? Unlike most drupes, the coconut is technically the stone, too. It’s actually thanks to this magical fruit’s reproductive process that we get coconut water, milk, oil and flesh all from the same fruit, just in different stages of its maturity.

This fun fact would have been well appreciated when I was small and encountered my first ever coconut. I remember the excitement at picking it out, the strange hairy fur bristling against my hands as I shook it next to my ear, attempting to hear a slushing sound that I thought was the fresh water. You can imagine my disappointment when I actually came to open the fruit, my Dad bashing it out of frustration, to find barely a teaspoon’s worth of grey liquid that tasted bitter and old.

Over ten year’s later, and I’ve forgiven that coconut – I’m a big convert to cooking with the oil, drinking the water and sprinkling dessicated coconut on my smoothies. But what kind of nutrients are we getting from all these coconut-based foods? Here’s my little summary after some research:

COCONUT MEAT
Let’s start with the basics – coconut meat comes in a number of forms, including fresh chunks (pictured), as well as dried flakes and desiccated coconut. The fresh version of the meat is almost 80% fat, containing all amino acids and an especially high amount of manganese. A lesser-known mineral, manganese is great for the skin, bones and heart. As for the amino acids – this make-up means coconut is a complete plant-based protein, but its protein content remains quite low.

Given its high fatty content, it may seem surprising that coconut meat is considered “healthy”, especially when that fat is chiefly saturated. However, due to the large lauric acid content, this fat is high-density lipoprotein (HDL), or “good cholesterol”. This is much better for the heart and blood than other saturated fats, although it should still be used in moderation.

As for desiccated or dried coconut, the fat content remains, but the manganese level drops significantly. If you can, go for fresh meat over flakes when fancying coconut!

COCONUT OIL
Coconut oil has been all over the place – I even featured it in my comparison of plant-based cooking oils a while ago, and I was shocked to discover its high saturated fat content. At this moment in time, there has been no proof that the HDL content actually helps the heart and blood, but it’s a much better alternative to oils with a higher low-density lipoprotein (LDL) content. On top of that, coconut oil is most often sold as 100% virgin, raw, and organic – this means it has had no chemical tampering during its growth and production process. With a lot of other cooking oils, they have been bleached, heated to a high temperature (thus removing nutrients) and have been exposed to pesticides – you can check the likelihood of this in the plant-based oil comparison I did here.

COCONUT WATER
Coconut water is possibly the green smoothie’s number one competition in terms of hype – but is it really that good for us? Taken from young, green coconuts, the water is really low in saturated fat unlike its flesh and oil cousins, yet still can be considered a complete plant-based protein due to its range of amino acids. Again, it is relatively high in manganese, as well as potassium, meaning it’s great for your skin, bones, heart, and kidneys.

COCONUT MILK
The final coconut by-product featured here is coconut milk – I use this a lot less than water or oil, normally in curries or sometimes making vegan ice cream. There’s a reason why coconut milk doesn’t share the same fascination as the water and oil, due to its crazily high saturated fat content. Coconut milk is a condensed mixture made from grating the meat and mixing it with coconut water, so it still shares the high proportion of manganese, but also the saturated fat. When using this in cooking, try to minimise how much you use.

Overall, it seems coconut deserves the attention it’s getting – the pretty unique combination of amino acids, manganese content and HDL version of saturated fat makes it a staple in a vegetarian, vegan or plant-based diet.

END_OF_DOCUMENT_TOKEN_TO_BE_REPLACED

Sign up to receive my newsletter, out every first Sunday of the month. END_OF_DOCUMENT_TOKEN_TO_BE_REPLACED